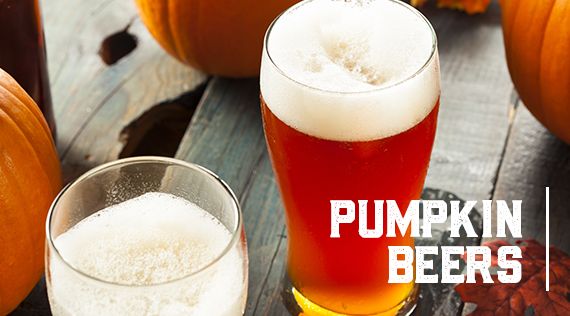 It should come as no surprise that this colonial era-inspired ale made with blended pumpkins and caramel malt is like drinking delicious, bottled fall. But hey, don’t take our word for it. Try it yourself alongside any of your favorite Thanksgiving dishes or your mom’s freshly baked mac and cheese recipe.

Like a mutant pumpkin that grows to grotesque proportions under the full moon light of All Hallow’s Eve, this brew is boasting some gargantuan – dare we say frightening? – pumpkin flavor. The first ever Imperial Pumpkin Ale, Elysian commits both roasted pumpkin seeds and extra pumpkin to the mash, kettle and fermenter along with cinnamon, nutmeg, cloves and allspice.

The brewers at Great Divide have been rounding up all the pumpkins that the headless horsemen has been throwing around to make this toasty brown ale. With notes of brown sugar and spices, this brew’s malty backbone enhances the autumnal flavors without letting it get overly sweet. This one is sure to satisfy the restless spirits, as well as friends and family, that may come around this season. 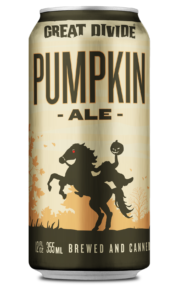 We all have that friend that’s been looking forward to Pumpkin Spice Latte season at their local café for the entire year – you can be that friend, but with Pumpkin Spice Latte ale from Left Hand. This fall-leaf-colored brew ticks all the PSL boxes and more with spices, Ozo’s Ursa Major coffee, toasted malts plus oats and lactose for richness and body. Top it all off with a pillowy Nitro head reminiscent of latte foam, check!

Rogue Brewery isn’t messing around when it comes to pumpkins. They chop up and roast whole pumpkins by hand before adding them to the brewing kettle. The resulting beer is a delicately spiced and tastes of cardamom, orange peel, and vanilla. Enjoy it alongside hearty fall dinners and your favorite people.

Lovers of Tupps’ Full Grown Man Imperial Stout can appreciate the bold caramel and chocolate flavors. With the addition of pumpkin spices and aged in bourbon barrels, those toasty notes are bigger than ever with the aroma and flavor of fall. This one can satisfy the thirst of a lumberjack gathering enough firewood to make it through winter. 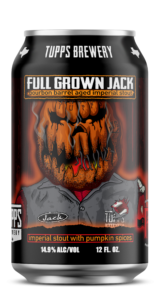 All the bready, malty goodness you’d expect from a Bock beer with the addition of pumpkin and spice. This is the version of Tupps Backyard Bock that you take outside in the fall to enjoy the crisp sweater weather with a group of friends. Sip it during a pumpkin-carving party or as you’re handing out treats when the ghouls come a-knockin’. 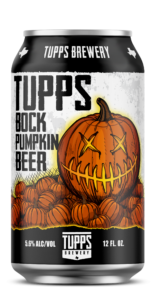 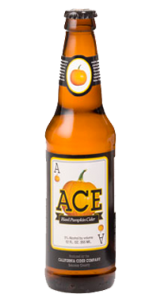 With that brilliant amber color, you know it's gon

Cheers to good times with family and friends. Have

Do you take your vodka with a little espresso or y