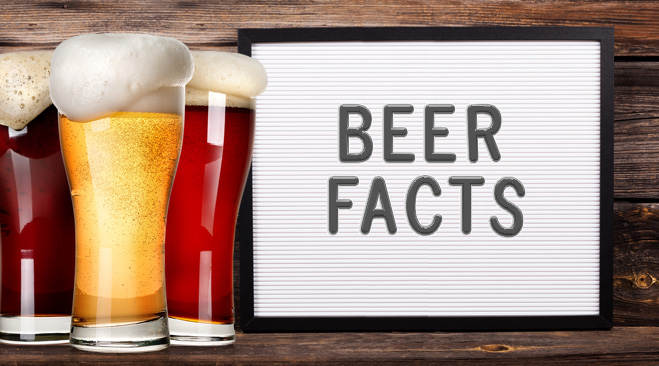 25 Interesting Beer Facts You Should Know

Some call it trivia, we call it dedication. To celebrate “Drink Beer Day” we thought digging up some hoppy facts would be a perfect way to pay homage to our favorite beverage. So, grab a beer and check out these fun, weird or magnificent facts (you decide).

1. The First Light Beer Flopped: The first light beer, called “Gablinger’s Diet Beer” was made in 1967 by New York’s Rheingold Brewery. This brew failed to take off and was ultimately discontinued.

2. Time for a Night at the Museum: Since the explosion in popularity of craft beer, the Smithsonian has maintained an ongoing national research project to collect and preserve the history and the stories behind the craft revolution. Not only are they cultivating a beer and brewing digital library, they have also created a special spotlight for American brewing. Read up on all their findings: https://www.si.edu/spotlight/american-brewing

3. Lidded Steins for your Health: Raise your hand if you thought that lid was for keeping out flies. As it turns out, stein lids were created to protect beer drinkers from contracting the plague. GULP.

5. Cans Can Do It: While a can prototype was in the works, Prohibition cut off the development of the beer can almost entirely. Shortly before the repeal of prohibition, the American Can Company came out with a prototype beer can and the rest is history!

6. More Beers than We Thought: With over 100 types of beer in the world, we know we’ve still got some serious ground to cover. Of the 100+, ales are some of the oldest and lagers are most popular.

7. A Delicious Accident: Ice Bock was created when in 1890, a brewery worker accidentally left a Bock batch outside one winter night. When his employer later forced him to drink the recently frozen beer, this punishment turned out to be a delightful treat that’s still loved to this day.

8. Beer Swimming Pools: Ever dream of swimming in beer? Yeah, us too! At the Schloss Starkenberger brewery in Tarrentz, Austria, you can take a dip in any of the seven 13-foot pools that they keep full of beer for the bargain price of about $250 per two-hour session.

9. The Sun Skunked my Beer: Despite popular belief, it’s not warm storage that brings out the skunky aroma in beer – although it may change the flavor. The real culprit is light. When the sunlight hits beer, it can cause a reaction that creates the same chemical compound as a skunk’s spray and smells just as icky.

10. Robot Beertenders: Thanks to Italian scientists at the University of Naples Frederico II, you may soon be waited on by BRILLO – Bartending Robots for Interactive Long-Lasting Operations. They will remember your favorite drink and even chat and joke around with you….But are they Cicerone Certified? 😉

11. Beer and Skittles: In Britain, where Skittles is a pub game similar to bowling, the idiom “Life isn’t all beer and skittles” refers to the belief that life can’t be all pleasure. But here’s to the pursuit of it regardless!

12. Most Popular: Surprise, surprise, beer is the #1 adult beverage in the US. On top of that, it’s defended that title for over 20 years!

13. Six Centuries of Lambic: First brewed over 600 years ago, the Lambic is one of the world’s oldest of our modern beer styles. Cheers to its next 600 years!

14. World’s Strongest Beer: While most beer has an ABV of 5%,    Brewmeister´s “Snake Venom” is not for the faint of heart. This Scottish brew comes in at a whopping 67.5% ABV! Don’t say we didn’t warn you!

15. BRB, Becoming an Ale Conner: In medieval England, an official beer-taster was known as an ale conner. Talk about a dream job! Bonus fun fact: William Shakespeare’s father, John, was an ale conner.

16. Beer Science: We all know that beer is amazing, but did you know that its bubbles can actually create a gravity-defying loop? Researchers at Stanford discovered that this occurs as the bubbles head up in the liquid’s center where drag from the glass is less and the bubbles head down on the outside edge of the glass. Neat, right?

17. Beer is King: The English word cash originated from the Sumerian root word for beer, “kas.” In Sumeria, beer was so valuable that it was often used as currency or to barter.

18. Pricey Beer: How much would you pay for a bottle of beer? For the devoted fans of the Belgian beer “Vielle Bon Secours,“ one bottle costs around $1000 USD. Yikes! That puts our own priciest beer here in the US to shame – Dogfish Head’s The End goes for about $50 a pop. Then again, neither can compete with the world’s most expensive beer, Allsopp’s Arctic Ale, which retails for a whopping $503,300!

19. Bring on the Lace: You know that foamy residue from a beer’s head that hangs onto the inside of a glass? It’s called “Belgian Lace” and is a sign of excellent head retention and a truly well-made beer!

20. Out of this World: Mankind’s love of beer isn’t just limited to the confines of the earth. There’s even a small crater on the moon named Beer!

21. Better with Age: The world’s oldest brewery, Weihenstephan can trace its roots all the way back to 724, starting out as a Benedictine monastery. Further solidifying it in beer history, it was here that Wilhelm the IV proclaimed the 1516 Bavarian Purity Law to regulate brewing ingredients.

22. Keeping it Frosty: Up until the Middle Ages, all beer was what we would classify as ale. Thanks to people storing their beer in the icy Alpine caverns of modern-day Germany and the Czech Republic, we enjoy lager beer today as well!

23. Breakfast of Champions: The rulers of medieval Europe knew just how to start their day. Instead of coffee in the mornings, they frequently downed a bowl of beer soup, consisting of beer (duh), cream, fat, flour, egg yolk and occasionally onion or cheese to make a hearty meal. We have mixed feelings…

24. Ice Cold Beer Hack: Last-minute party planning can leave you with warm beer and friends at the door. But do not despair – you can chill a beer in as little as two minutes by stirring it in a bowl of ice and salt. Cool your beer off fast then get back to the party.

25. Breweries in Abundance: Thanks to the explosion in popularity of craft beer and home brewers taking it to the pros, the number of breweries in the US has been climbing steadily since 2012 – and now there are over 9,000 breweries in the country!

With that brilliant amber color, you know it's gon

Cheers to good times with family and friends. Have

Do you take your vodka with a little espresso or y