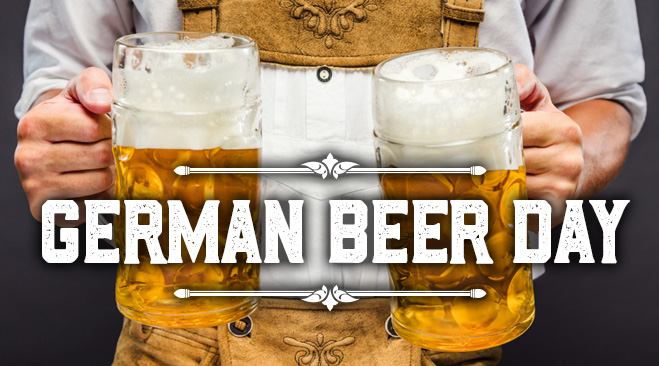 Hold onto your Lederhosen, we’re about to drop some knowledge. German Beer Day on April 23 traces its origin all the way back to 1516 when the beer purity law – or Reinheitsgebot – effectively outlawed any ingredient other than barley, hops and water in the brewing process.

What about yeast? They didn’t yet understand its function. Essentially, the law was consumer protection, keeping prices low and dangerous, sometimes hallucinogenic ingredients out of beer.

What about your favorite Hefeweizen or Weißbier which uses wheat instead of barley? Eventually, they expanded the law to include any malted grain and, of course, yeast.

And that’s it – four ingredients, yet so many possibilities! After extensive taste testing, we’ve compiled our favorite breweries that make the most out of what they’re working with to deliver prost-worthy flavor.

The inspiration is in the name! Old world standards executed with modern tech allow Altstadt – German for Old Town – to deliver beer with a smooth, crisp flavor, thanks in part to the fresh waters of Texas Hill Country.

From the home of Oktoberfest, this Munich-based brewery began with monks in a monastery and now delivers their delectable, purity law-compliant brews to 70 countries world-wide.

Also hailing from Munich, Hofbräuhaus is beer royalty and claims their brews follow recipes descending from a Bavarian duke, a relative of the one who signed the Reinheitsgebot into law – no wonder their logo is a crown!

This brewery born near Dresden attributes some of their passion for pilsner to the crisp Saxon air – but don’t worry, they aren’t violating any laws by brewing with it.

This 125 year old brewery made a splash in Munich by brewing light beer in dark times – as in, times when everyone was drinking dark beer – and continue to brew exceptional quality beer thanks to the purity law and the purity of the water in their own wells.

Named for the small German town where they got their start, this family-owned brewery has an ace up their sleeve when it comes to one of the four ingredients: The extra-soft water from a reserve in the surrounding forest gives their brews a distinctive and delicious flavor.

With over 1,000 years of brewing experience, Weihenstephaner predates the Reinheitsgebot but claims some credit for the purity law, and they even boast the name Bavarian State Brewery Weihenstephan.

This iconic Belgian wheat beer takes a couple liberties from the Reinheitsgebot by adding coriander and orange peel to their beer – so if four ingredients just doesn’t sound like enough for you, this is our recommended cheat beer.

We're here for the chocolate, toffee, molasses and

Coffee, chocolate and bourbon, oh my! 😋🤤The

You're gonna fall for this Texas take on a German

Brewed for all you wild ones out there. 👈 @sain

This new juicy and hoppin' beer is a tribute to th

Brewed with Vienna and Munich hops for that authen