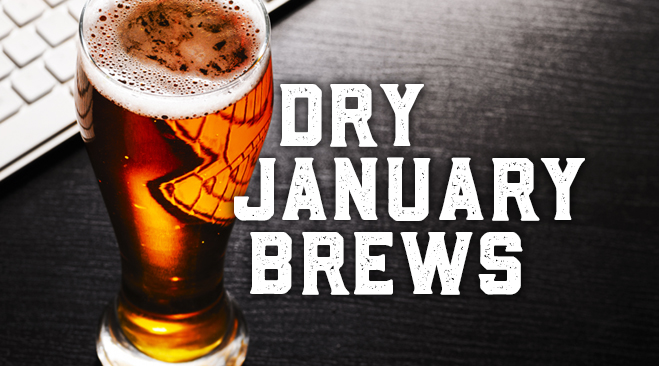 For beer lovers everywhere, these two words can represent the most challenging days of the year: Dry January. But do not despair! This year, you can atone for your holiday excesses without forgoing the beverage you love. We’ve found a delicious loophole for you. Below you’ll discover our selections of crisp and refreshing non-alcoholic options with no shortage of flavor. Get ready to sail through that Dry January challenge!

Athletic Brewing Co truly brought non-alcoholic beer into the 21st century. Carefully applying both the art and the science of craft brewing, they’ve developed a wide variety of options from IPAs to stouts to lagers and more.

With subtle notes of gingerbread and vermouth, Bitburger 0.0% Premium Pils Drive is one non-alcoholic brew that allows the delicate aromas and flavors of true German beer to shine.

So named because of the seemingly magical fermentation technique that allows for all the character of beer without the alcohol, Brooklyn Special Effects is sure to satisfy your cravings. Whether you’re hankering for Pils, Hoppy Amber, IPA or Hazy IPA, they got you. Grab the variety pack and thank us later.

Accolades abound for Clausthaler’s award-winning brews, and it’s safe to say that their Original, formerly Clausthaler Classic, sets the bar for other non-alcoholic beers. Their other world-class offerings expand on that Original formula with Grapefruit, Dry-Hopped and Lemon.

Thanks to cutting-edge brewing methods, Community captures the juicy, hop-forward deliciousness of a traditional IPA but without the alcohol. If your resolutions include working out, this one makes a perfect after-gym refreshment this Dry January and all year round.

Get ready to be shocked that you’re not drinking the original Black Butte porter when you sip on this NA version. This Dry January, go ahead and pair your chilly outdoor activities with this rich and roasty brew.

Dogfish Head’s juicy addition to our non-alcoholic line-up is in heavy rotation during Dry January…and maybe into February, or March – who are we kidding, we’ll be drinking it all year.

Erdinger’s non-alcoholic Weissbier might not be your next go-to pre-workout drink, but it boasts some healthy qualities, such as its isotonic properties (we had to look it up, too) and an infusion of vitamin B9.

Making your Dry January free and easy, Karbach’s non-alcoholic IPA is an open invitation to good times. This brew is made for IPA lovers observing their annual abstention, or really anyone who enjoys a smooth, balanced IPA on their lunch break.

Even Lagunitas are astounded that they developed a non-alcoholic IPA that’s quite this good, although it may have something to do with the high-quality Yakima Valley hops that they also use in their regular IPA.

Refreshment knows no equal to the radler – a thirst-quenching combination of Hefe-Weizen and lemonade – and Paulaner has done a great service to all those undertaking Dry January with this non-alcoholic version.

Pioneers of the non-alcoholic beer niche in Texas and across America, Texas Select lends Lone Star energy to their lager, which hints of apple and spice among its dry malty taste.

Thanks to select high quality ingredients, the same full-bodied flavor can be found in Warsteiner’s non-alcoholic offerings as in their original pilsener.

Ngl, craft in a can was a game changer 💯 #BeerC

Kick back, relax and enjoy 🌟 @karbachbrewing .

Like a clean, zesty bunch of hops smackin’ you i

Thank you, Dr. Martin Luther King, Jr., for your g

We're sippin on this tart and refreshing brew this