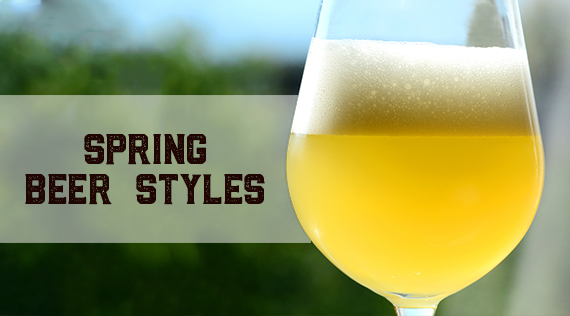 Perfect Spring Beer Styles for Sipping in the Sun

Spring has sprung! The birds are chirping, the sun is shining more, and we find ourselves gravitating toward lighter beer styles that are just asking to be enjoyed at favorite outdoor drinking spots like a backyard or a sunny porch. Looking for the perfect beer styles to go with your spring? Check out some of our seasonal favorites and get ready try some of this crisp refreshment for yourself! As an added bonus, we’ve even included the proper glass for each beer type and a pairing recommendation to help you get your spring on like a pro!

A classic German beer style, the Gose is a top fermented wheat beer and is perfect for casually sipping on beautiful days. This dry, cloudy yellow brew is lightly hopped, typically seasoned with ground coriander seeds, and is slightly salty. Refreshingly crisp and a little sour, the Gose is also occasionally infused with fruity flavors so keep an eye out for yummy varieties!

Pairing Recommendation: This salty beer pairs well with grilled foods – so get out there and fire it up! We’d also like to point out that salt pairs well with caramel… just saying.

Originally brewed in the winter at farmhouse breweries in preparation for all the thirsty, hardworking farmhands during the summer months, Saisons were destined to be the perfect warm weather beer. The modern Saison has undergone a revival in the United States and now comes in a wide range of spring-palate pleasing varieties. Complex by nature, Saisons are typically somewhat fruity in flavor and aroma, mildly tart, and ever-so-slightly sweet.

Pairing Recommendation: Perfect with chicken or richer seafood – lobster and shrimp, anyone?

Another classic out of Germany, many US breweries have now adopted this thirst-quenching style and made it their own. A gorgeous pale beer, the Kölsch has a dry flavor, is softly hopped, and is superbly sessionable.

Pairing Recommendation: enjoy a Kölsch with with lighter fare like salmon or a tasty spring salad. Looking for something a little heartier? Match up a Kölsch with its soul mate – a hot, grilled German bratwurst!

The Hefeweizen hails from southern Germany but has gained a serious following here in the US. This wheat beer’s unique yeast variety gives it some fun flavors that are perfect for the warmer seasons. You may taste banana, bubblegum, cloves, other spices, or even apples in this tasty dry and tart brew. Hefeweizens are cloudy and often enjoyed with a slice of lemon – although that can affect the beer’s aromatic head.

Pairing Recommendation: Hefeweizens pair impeccably with fish tacos, salads with fruit and goat cheese, and chicken dishes – can anyone say spring dinner in the back yard?

Mix these effervescent offerings into your rotatio

Just the right amount of zest with a touch of loca

This one is a straight up juice bomb 🔥 @sweetwa

A psychedelic IPA with dankness and citrus swimmin

How much King Cake is too much? 🤷‍♀️ Let'